Special guests at the screening include actor Tom Skerritt and Renton City Council member James Alberson, a community judge for the Film Frenzy.

The one-hour Film Frenzy screening is free to attend and features the seven-minute films created earlier this month. Local filmmakers paired up with organizations and businesses to creatively highlight the group and promote Renton as a creative, exciting place to live, work and play.

The short films are intended to feature local history, scenery, and diversity, and support the arts in the community.

Renton Film Frenzy was coordinated in partnership with the Seattle Film Summit.

Renton Film Frenzy organizers are pleased to bring back the event after several years’ hiatus. The project adds to the “creative economy” that’s building in Renton — a welcoming community for encouraging, producing and showcasing all forms of art.

Get all the film project details at Rentonfilmfrenzy.com. 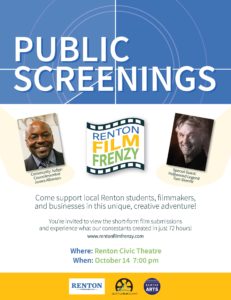