The Renton AmeriCorps VISTA team is putting a spotlight on hard working people and organizations that work to support their community. This week’s spotlight is for Ryan Hammond!

Ryan Hammond is the owner of Handsome Devil Ink in Downtown Renton.  In addition to his business, he has also been involved with many local art projects that contribute to the diverse collection of art in the downtown area.  Ryan was motivated to contribute his artwork because “…it really puts a smile on people’s face and gives them something to look forward to.  I’ve had several instances where I’ve seen small kids walking with their parents kind of doing a scavenger hunt for all the different hydrants downtown and it’s really cool to see them be excited for the art…”

What projects have you been involved with? 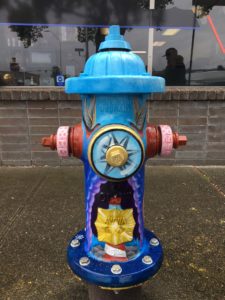 Ryan has painted three fire hydrants that are displayed in Downtown Renton.  “[Painting fire hydrants has]…been a really fun, exciting project.  I’ve got to kind of push myself a little bit further with art.  I’ve never actually painted on a fire hydrant previous to this so I definitely had some learning challenges and some learning curves throughout the process, but it’s been very fun.”

The first fire hydrant shown on above “…was a little bit more nautical themed with the compass and octopus.  I tried to keep it a little bit tattoo-oriented since it’s in front of the tattoo parlor here.”

“The second one I did was outer space themed.  I’ve always just really enjoyed outer space and thought it was really cool stuff.  I also pushed myself using different art techniques on that whereas I’ve never really used spray paint to create a mural, especially on a round surface.”

“The third one I chose just to do a light house, mainly because I just looked at the hydrant and that’s what it reminded me of from the very get go.  So I thought it would fit really well and decided to stick with that.” 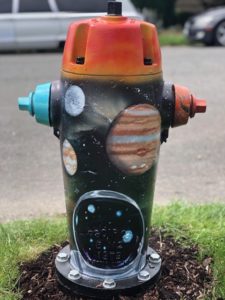 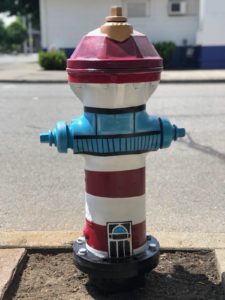 Ryan also participated in Renton’s Chalk Your Walk, saying “…I saw an opportunity to do something fun for the community and do a little bit of art so that the people driving by or walking by will have something cool to look at and just brighten up their day a little bit…” 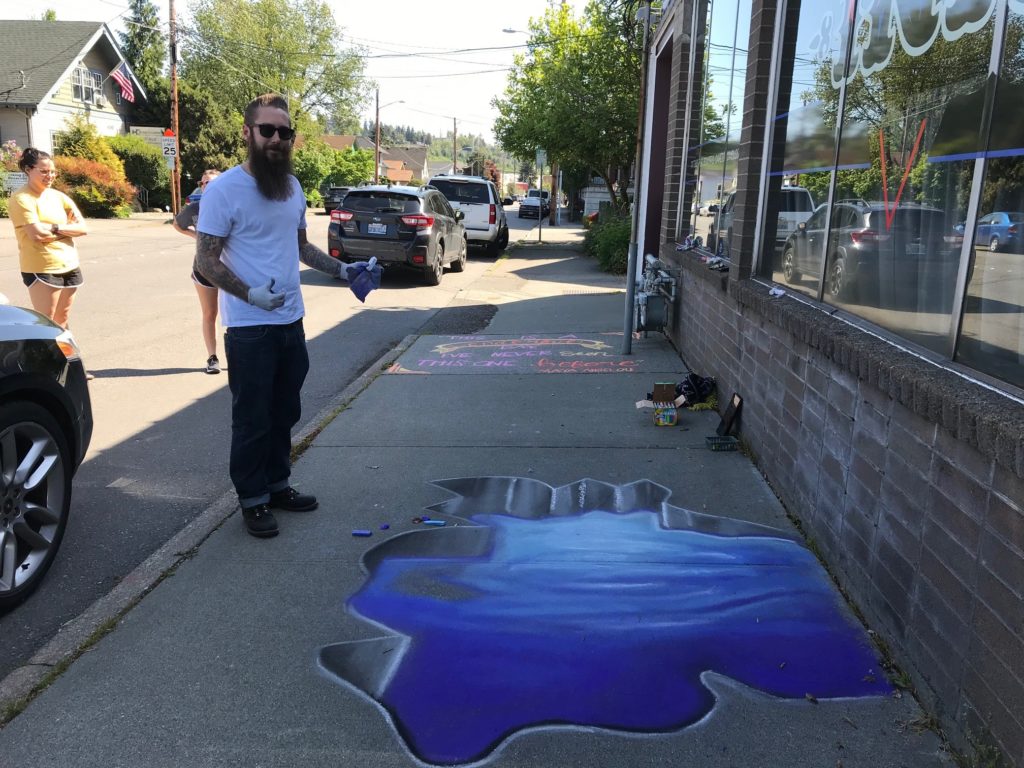 Why do you think art benefits the community?

“I think art benefits the community in the sense that we do get to see a lot of the different culture we have in the downtown area and you can see that through the artist style…and it’s just really, really cool to see that diverse artwork coming from the people that are in this area.”

What advice would you give to people who are interested in using art to give back?

“It’s important just to put yourself out there and not be afraid or ashamed of what you’re doing, it’s still going to make somebody happy in the long run.”